* Please kindly note that our services can only be used to support research purposes (Not for clinical use). 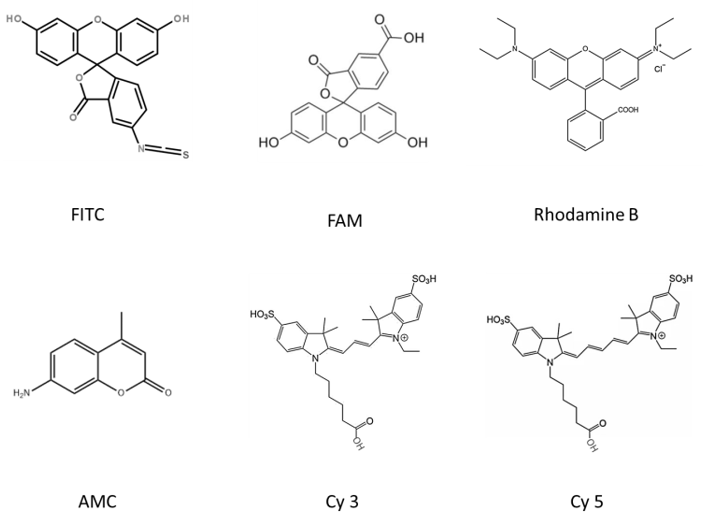 Fluorescein isothiocyanate (FITC) has relatively high activity. Generally, it is easier to introduce this type of fluorophore during solid-phase synthesis than other fluoresceins, and there is no need to add activating reagents during the reaction. FITC modified peptides usually have two main forms:

(1) Connect FITC at the N-terminus of the entire peptide chain, and insert a molecule of Acp (6-aminocaproic acid) before FITC, also known as an alkyl spacer.

(2) One of the peptides in the entire peptide chain: The Lys side is linked into FITC, and the Lys side chain is a four-carbon straight-chain alkyl with the terminal -NH2, which directly plays a role in reducing steric hindrance.

It is usually used in the application of laser confocal microscope and flow cytometry technology.

Rhodamine B is one of many rhodamine dyes used for fluorescence determination.

5-TAMRA is one of the most popular orange fluorophores for labeling peptides and proteins.

Cy3 and Cy5 are dyes with high extinction coefficient. Therefore, they are particularly suitable for sensitive peptide localization experiments in cells. Their disadvantage is that they are very unstable in the environment of peptide synthesis, so the amount of synthesis is relatively low.

The role of fluorescent labeling technology

Fluorescent labeling technology also has a wide range of applications in the fields of protein function research and drug screening. People use fluorescently labeled peptides to detect the activity of target proteins, and the high-throughput activity screening methods developed by them are applied to drug screening and drug development of target proteins for disease treatment (for example, various kinases, phosphatases, peptidases, etc.). Fluorescence has a wide range of applications in the fields of biochemistry and medicine. People can attach fluorescent chemical groups to biological macromolecules through chemical reactions, and then sensitively detect these biological macromolecules by observing the fluorescence emitted by the tracer group. Common applications include: chain end termination method for automatic DNA sequencing; DNA detection; DNA microarray (biochip); flow cytometry (also known as fluorescence activated cell sorter, FACS); fluorescence microscopy imaging Technology, etc. Fluorescent labeling technology is also used to detect and analyze the molecular structure of DNA and proteins, especially the more complex biological macromolecules. For example, green fluorescent protein and related proteins have become important tools in biochemistry and cell biology research.